So tell me about The Last Strange Kings series.

The Last Strange Kings is a multi-generational epic fantasy set in a fully imagined world.

The Strange Kings have ruled Eskalind in an unbroken line of father to only child- always a son- for nearly 3,000 years. The royal family is charged by The Powers with keeping the peace amongst Eskalind’s border nations. Book One, The Bladesmith’s Daughter , establishes the culture and concepts of Eskalind through an outsider’s eyes. Book Two, Doubt Will Come, unwraps some sinister machinations afoot. I will say no more for now.

How did you come to start writing the story?

Backwards! A scene came into my mind; that scene appears in Book Five, The Powers’Son. From there, I worked back through the timeline seven generations, then realized that was too far for this story. I began Book One five generations ahead of Book Five. But going so far back in the timeline yielded plentiful back story for the families of Book One’s characters. As the First King and the founding of Eskalind figure prominently in Eskalind’s history and truly influences its future, there’s detailed backstory for that era, too.

The unbroken line of succession from the first king to the 124th King, which is where Book One starts. That’s due to The Powers protection and engineering. Each Strange King has one son, one son only, and this assures a clear line of succession. The King, or King’s Son, cannot die until his heir is conceived. That’s a state secret, and comes in handy when there’s a battle; if you have one man who cannot die, who best to lead the troops and face the enemy?

How did you come up with the name Strange Kingdom?

I needed a term that would convey key concepts of Eskalind, a land of unusual customs that wouldn’t succeed without intervention by The Powers.

I was working with different ideas and terms and came up with “Strange King”, and thought I’d Google it and see what was out there. This was when I began the Eskalind story in 2003. At that time, the two top results were King Arthur and Jesus. I thought that was pretty good company and went with it!

But there are other reasons too. “Strange” as Eskalind has not been attacked in millennia, there’s barely any crime, and pregnancies only occur when the couple is meant to be together. That’s all very strange to the rest of the world.

“Kingdom” as the ruler always has one child, always male, and that harkens back to the First King and how his rule and family came to be. But there are plenty of strong women over the millennia who join with the Strange Kings, and Eskalinders are more equitable in their society than most nations in this world. Which is another reason outerlanders see them as strange!

You use some words with different meanings than they have in our world, such as “quarry”. Tell us about some of those words.

What an Eskalinder would call a quarry, we would call a castle. Thanks to the protection of The Powers, Eskalind has known no warfare within its borders for nearly 3,000 years, right? So what were once castles and fortresses for defense have crumbled into a pile of rocks and stones. And where does one go to obtain rock and stone? A quarry. So a ruined castle functions as a quarry.

King’s House in Eskalind is not where the King lives, it’s the term for an orphanage, where parentless children are housed, fed and educated at the expense of Eskalind’s King.

King’s Halls is where the royal family resides. To bring this full circle, King’s Halls resembles a giant house, as Eskalind’s royal residence has not needed to be a castle in millennia.

Joining is the same as marrying, but in Eskalind one cannot unjoin, or re-join after the death of a spouse.

That’s got to cause some issues.

Truly. Wanting to rejoin is one of the chief reasons Eskalinders permanently leave their home country. Normally who would want to leave a prosperous land free of crime?

What are some other unusual customs in Eskalind?

No birthdays, rather a Naming Day, the day both parents named their child. So if your dad was away when you were born, your Naming Day is when he returned, saw you for the first time and with your mother, named you.

The parents couldn’t just pick a name ahead of time?

No, that’s actually a big taboo in Eskalind. Eskalinders believe The Powers guide them to the right name for a child; there’s a proscribed ceremony where both parents look at the newbabe and the same name suddenly comes into their minds.

Ha, indeed! But thanks to The Powers, it works in Eskalind. Another custom is if a woman is sexually interested in a man, she lets him know by showing him her bare feet.

So open-toed shoes are not very popular in Eskalind.

Nope, women usually wear slippers that cover the foot. It is amusing when Eskalinders travel to warmer climates and see lots of bare or sandaled feet. Are all these women coming on to me? Ha!

The borderwall in Book One cracked me up. It’s so short even a horse walks over it!

(Chuckles) It all goes back to The Powers’ protection. When you have The Powers’ repelling invaders and bad guys, why have a high wall? But it used to be a tall, imposing wall, built when Eskalind’s borders were determined by Heedlich First King. Since that was 3,000 years before the series begins, by Book One, the borderwall has crumbled to a short pile of black rocks. But The Powers’ protection still keeps bad guys out, for now.

What’s unusual about this series?

What is purposefully missing, which in a way is difficult to address. I will just say it; there are no arrows, or any other weapons that fly through the air in this world. Revealing more would spoil plot points in Book Three, The Flame Quencher.

There’s also no fantastical creatures, or monsters, just monsters of the imagination and the past. There’s the fear, the threat of impending bad things to come. It’s more psychological.

The book covers do not look like what one typically sees on a fantasy shelf in a bookstore nowadays. Why?

We chose strong graphic covers to stand out from the crowd, which often uses photo-realistic illustrations.

It’s funny, both myself and my husband, who designed the covers, have extensive knowledge of Photoshop, and could have created a standard fantasy cover on our own. But we wanted something different.

Lastly, it was a homage to a hardcover edition of The Once and Future King by T.H. White that resides permanently on my nightstand. 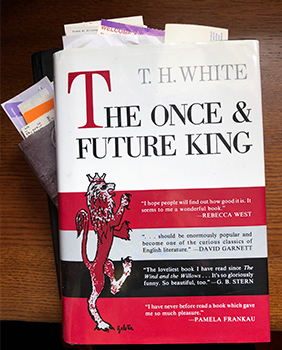 What is your writing process?

For original, straight-out-of-my head writing, I write whenever there’s a 30 minute or greater chance of being free from other obligations. I run a business, and even on work-from-home days it’s difficult to go to Eskalind. But, if there’s a lull at work, that’s a good time to edit, flesh out a character’s bio, or work on new character or country names; tasks that can be interrupted easily. With a story this encompassing, there’s always a lot to do in those areas.